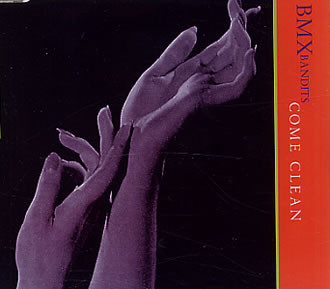 It was back in 1991 that BMX Bandits recorded the album Star Wars, issued on the London-based but Japanese-oned label, Vinyl Japan. The make-up of the band had always been fairly fluid, but the cast for this particular album was fairly stellar with Duglas T Stewart being joined by Gordon Keen, Norman Blake, Joe McAlinden, Eugene Kelly and Francis MacDonald. The fact that members of Teenage Fanclub, The Vaselines and The Groovy Little Numbers were all present meant that we got as close to a Bellshill super-group as it was close to imagining.

All that was missing was a Soup Dragon, but then again the album coincided with that particular band enjoying some unexpected chart success having made a deliberate move away from the indie/twee with which they had initially made their name and out onto the dancefloor where they embraced Madchester/Baggy with the hit singles I’m Free and Mother Universe.

The opening track on Star Wars was also the accompanying single. It is quite atypical of the lyrics Duglas has penned throughout his career but with the tune having input from all the musicians, it is something of a cut above the norm:-

The single was issued only on CD and 12″ vinyl, but the latter format allowed an extended remix of the single to take up an entire side of the record. It’s one on which Duglas’s vocal contribution is removed in its entirety:-

It’s as baggy a piece of music as you can ever come across, either paying tribute to or ripping off the Mondays, the Roses, the Carpets and all the others who came in their wake. The subtitle in the brackets, however, indicates that this was all about enjoying themselves in the studio while poking fun at their pals in The Soup Dragons….

Absence in this instance really did make the heart grow fonder.

4 thoughts on “THE ULTIMATE MADCHESTER/BAGGY TRIBUTE?”