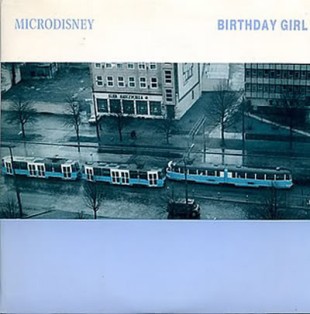 Microdisney was an Irish band that was founded in Cork in 1980, with its two mainstays being Cathal Coughlan (keyboards, vocals) and Sean O’Hagan (guitar). The band broke up in 1988 with Coughlan going on to form the Fatima Mansions while O’Hagan fronted the High Llamas.

After some 30 years, they got back together and then broke-up again following live shows in London in the summer of 2018 before Dublin and Cork in February 2019.  An extensive interview, given subsequently by Cathal Coughlan to an Irish newspaper, provides all the explanation you need. Here’s an edited version of it:-

Where there is an end, there might also be a cautious beginning. Cathal Coughlan, the Cork man perhaps best known for being the vocalist and lyricist of Microdisney, is wrapping up the group, setting alight to the package and scattering the ashes on to waters that will transport them to the afterlife.

“There are a number of things that persistently matter to me,” says Coughlan of his next creative step, “and one is the art song. Whether it’s German theatre, Sinatra, Tin Pan Alley, Northern Soul or discordant, pernickety song composition from the late 20th century, those are the things I care about. A lot of what I’m doing is in that range. The challenge is: how do you do something noir that doesn’t allude? I don’t want to allude if I can help it.”

Now in his late 50s, with robust features, Coughlan has much more a measure of himself than he once had. He is the exact opposite of Joni Mitchell’s pronouncement as a songwriter to comfort more than disturb. He speaks slowly, cautiously. He has the manner of someone who has come through conflict intact yet is very much in charge because of it, and he has a knack for closing circles with precision.

He did the same with his post-Microdisney groups, Fatima Mansions and Bubonique, but this time last year he had to re-open the box that his first band had been sealed in for over 30 years. The reason was Microdisney being, in 2018, the first recipient of the IMRO/NCH Trailblazer Award, which celebrates culturally important albums (in this case, 1985’s The Clock Comes Down the Stairs) by iconic Irish musicians, songwriters and composers.

“I felt very humbled,” he says of the award being bestowed. In acceptance, he includes the other band members, particularly fellow Cork colleague Sean O’Hagan. “Obviously, Sean and I are more rooted in Ireland, and so it possibly meant something different, but everyone was blown away by it.”

It shows how Ireland has changed, says Coughlan, who recalls that in the mid-1980s, the band could never have afforded to self-finance a journey from London to Dublin. “It would be unwise not to accept that there was a generational aspect to it, but it meant a hell of a lot to be given such an award by a major cultural institution.”

Was there a sense that Microdisney had either been completely forgotten about or were little more than a fond memory for a certain demographic of music fan? “The dust had settled for us,” says Coughlan with an unsentimental air of finality. “Any emotional stuff that we had from the ’80s had long ago drifted off into the ether; we knew we could play the material, and I knew that I could relate to a lot of the emotional aspects of it.”

If the Microdisney shows last June (two at the National Concert Hall, one of which was invite-only, one at London’s Barbican) proved anything, it was that their songs have stood the often perilous test of time.

Regarding talk of further Microdisney shows, Coughlan says: “There was an ellipsis more than a discussion. Other than we had all enjoyed it and that the shows exceeded our expectations – which were high enough to begin with – we all had other stuff going on, so it got a bit quiet.”

Cue a promoter’s offer, however, to play gigs in Dublin and Cork. “We just decided to do it, yet not the same as last year. The two shows, however, is really the extent of it.”

Why such a definitive end?

“Because in the context of being a songwriting and recording outfit, Microdisney ran its course. Yes, people appreciated it, and it made a big difference to my life, but let’s just leave it, for the most part.” He says the band can be revived, and that fun would certainly be had, “but that’s about the size of it”.

So there you are…..a band that was well-loved in their native land doing the decent thing by playing a very small number of shows in acknowledgment of a major award then calling it a day before their legacy runs the risk of being tarnished. A number of their peers should take heed…

Here’s a 12″ single, complete with two b-sides, from the 1985 album, put out on Rough Trade Records, that received that IMRO/NCH Trailblazer Award:-

The a-side is very poppy and radio-friendly….a sort of cross between Prefab Sprout and Deacon Blue.

Selected today as it is Mrs Villain’s actual birthday…..

12 thoughts on “SOME WORDS ON MICRODISNEY”