A GUEST POSTING by flimflamfan 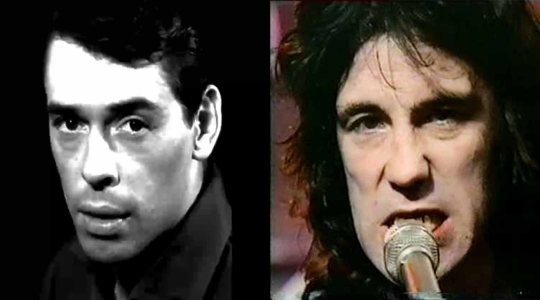 Naked a sin
An army towel, wrapped around my belly
Some of us weep, some of us howl
Knees turn to jelly, but Next! Next!

I was just a child
A hundred like me
I followed a naked body
A naked body followed me, Next! Next!

I was just a child when my innocence was lost
In a mobile army whorehouse
A gift of the army, free of cost. Next! Next! Next!

Me, I really would have liked a little bit of tenderness
Maybe a word, maybe a smile, maybe some happiness, but Next! Next!

It was not so tragic
and heaven did not fall
And how much at that time
I hated being there at all, Next! Next!

I still recall the brothel trucks, the flying flags
The queer lieutenant slapped our arses
Thinking we were fags. Next! Next! Next!

I swear on the wet head of my first case of gonorrhea
It is his ugly voice that I forever fear, Next! Next!

A voice that stinks of whisky, corpses and of mud
You took the voice of nations
The thick voice of blood, Next! Next!

Since then each woman I have taken into bed
They seem to lie in my arms
And they whisper in my head, Next! Next! Next!

Oh, the naked and the dead
Could hold each other’s hands
As they watch me dream at night
In a dream that nobody understands
And though I am not dreaming in a voice grown dry ‘n’ hollow
I stand on endless naked lines of the following and the followed
Next! Next!
One day I’ll cut my legs off
I’ll burn myself alive
I’ll do anything to get out of life, to survive
Not ever to be next, Next! Next!
Not ever to be next, not ever

These lyrics reflect the live version below. If ever a lyric outlined the inhumanity of war and the desperation of those ‘lucky’ to still be alive it is this.

Yesterday I received an email from a friend noting that he had downloaded some Alex Harvey and was quite enjoying it. My friends and I’s musical enjoyment rarely converges as he sits very much at the experimental rock side of the musical spectrum. I once recall asking him to turn off a Frank Zappa song as it was making me feel nauseous.

Anyway, it surprised me that he wasn’t well versed in Mr Harvey? I like The Sensational Alex Harvey Band but not enough that I could be described as a fan. I was introduced to the band when I was about 10 or 11 via the LP Next. It was actually the song Next that had me hooked with the line “The queer lieutenant slapped our arses. He’s thinking we were fags. Next! Next! Next!” It made an impression for 2 reasons:

1. That absolute Glaswegian drawl. I’d never heard anything like it.
2. He said “queer” “arses” and “fags”. Although I’m not sure at that age I’d have understood ‘fag’. A cigarette, perhaps? Yes, definitely a cigarette.

I don’t often listen to the one Sensational Alex Harvey Band LP I own – a compilation – but I do listen to Next on a semi-regular basis and not just Harvey’s version. The version I listen to more regularly is the original by Jacques Brel. I can say with some conviction that I am a Brel fan and have been since my early teens – probably not long after I heard Harvey’s version – my friend’s dad, French himself, constantly played French language music – Brel, of course, being Belgian. I was smitten by this ‘different’ music and have no real idea as to why? I really enjoyed it but understood none of it. I couldn’t even say – even now – if the English version of Next captures the literal sense of the original?

Harvey provided what I believe to be a mesmerising version on The Old Grey Whistle Test. Watching the video this morning I was still moved by it. It’s an exceptional performance and one that may very well capture the first, raw, Glaswegian singing voice on television. To all those that came later in the 90s espousing a ‘Scottish vocal sound’ a debt is owed.

Brel’s live performances of the song are equally as engaging. I have chosen a performance credited (Madagascar) but can’t verify that. The recorded version of this song is a favourite but live, well, it comes alive. This is my favourite live version. He takes on the characters within the songs gesticulating wildly as he does so. It’s far from someone singing a song it’s an artistic performance and utterly captivating. Brel according to Wikipedia “…is considered a master of the modern chanson”. I don’t disagree.

4 thoughts on “SOME SONGS ARE GREAT SHORT STORIES (Chapter 36)”