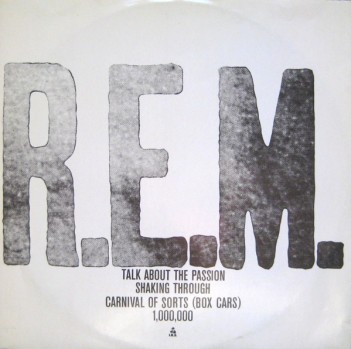 SWC has provided some outstanding entertainment over the past few months but it is now time for Sundays to be returned to its traditional slot of looking at the UK singles released over the years by a singer or band.  The spotlight was most recently shone on The Auteurs/Luke Haines, while previous efforts have included Simple Minds, Marc Almond, Paul Haig, Grinderman, New Order, XTC, Undertones, Buzzcocks, Cinerama, The Clash, The Style Council, The Jam, Altered Images, and James.

It’s fair to say that some efforts have been better received than others and a few suffered from fatigue in that they covered too long a period and/or some 45s were pretty sub-standard.  There’s a chance that by deciding to go with R.E.M. that something similar will happen, but hopefully not for a long while.  This will, all being well, run for over a year…..

And the reason it is kicking off with Part 2 is all down to the fact that Radio Free Europe, featured, very recently, as part of the great debut singles feature.

The Hib-Tone version of Radio Free Europe was released in July 1981 and was a USA-only release.  The same was true for the next piece of vinyl, the Chronic Town EP in August 1982.  A year later, the band re-recorded the debut single for inclusion on the LP Murmur, and new label, IRS, decided to issue it as a single.  It charted at #78 at home but didn’t do anything in the UK.  For the sake of completeness, and to bring this long and rambling into to a merciful conclusion, here is its b-side:-

It’s a rather perfunctory cover of The Velvet Underground song.  This was one of the first songs I ever heard by R.E.M. and I thought it was so dismal that it put me off them for a long time – it would take until the release of Document in 1987 before I began to pay proper interest.

IRS issued Talk About The Passion as a promo-only 12″ single in the USA with the two b-sides, Catapult, and Sitting Still, similarly taken from Murmur.  Here in the UK, the track was given a proper, if somewhat limited release, on 12″ vinyl with Shaking Through, also from Murmur, included while the flip-side offered up two of the tracks from the otherwise unavailable Chronic Town EP:-

I can now totally understand why the early singles and debut album had such an impact on those who picked up on the band at the very beginning, but I still feel that ‘Passion’, after an amazing instrumental opening and initially mesmeric vocal delivery, folds in on itself after about two minutes and becomes repetitive and I find myself switching off.

The b-sides are all reasonable enough without really setting any heather on fire.  I certainly don’t think they were, or are, as memorable and timeless as many of the UK singles from indie-guitar bands that I was more familiar with back in 1983.

Bring on the brickbats………