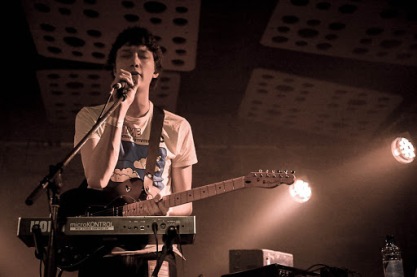 Here’s the thing. I had no idea that the talent behind today’s featured act wasn’t Scottish……but given that I’ve always thought he was….and that’s he’s been part of the scene up here for so long……AND….that the track I’ve selected is sooooooo good……he’s in.

Julian Victor Corrie (born 20 June 1985), better known by his stage name Miaoux Miaoux, is an English producer, musician and songwriter based in Glasgow, Scotland. He is signed to Chemikal Underground Records, who have released his albums Light of the North and School of Velocity. Prior to his solo career Corrie was a member of the Glasgow-based band Maple Leaves.

Corrie is currently a member of Scottish indie rock band Franz Ferdinand and has created remixes for CHVRCHES, Belle & Sebastian and Lindstrom, amongst others. Corrie plays all the instruments on recordings himself, and performs live with drummer Liam Chapman (Prehistoric Friends, Quickbeam, Friends in America) and bassist Liam Graham.

Light of the North was recorded and produced by Corrie himself, and mixed by Paul Savage at Chem 19 Recording Studios. It was nominated for the Scottish Album of the Year Award in 2013.

The album artwork is by James Houston, a frequent collaborator of Corrie’s, particularly in Polybius, a short for Channel 4’s Random Acts, which Houston directed. Corrie produced the single “I.D.L.U” by Bdy_Prts, a project by Jill O’Sullivan of Sparrow and the Workshop and Jenny Reeve of Strike the Colours which was released on 3 March 2014. He has worked alongside comedian Robert Florence, producing tracks for the television show Burnistoun. Florence’s production company, Bold Yin Productions, also produced award-winning artist Rachel Maclean’s short Germs for Channel 4, for which Corrie provided music and sound design. Corrie has continued to work on further projects with Rachel Maclean as well as the National Theatre of Scotland.

One of my favourite pieces of Scottish electronica.  From the album School of Velocity released in 2015.