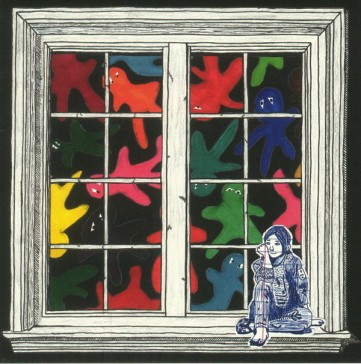 A song that always reminds me of KT, because it was in her car that I first heard it.

Seems appropriate to hand over to her……..

So Dom and I have got through a whole year without forgetting that we had a child.

I’ve not managed to leave her in the pub, Dom hasn’t forgotten to get her out of the swing in the park. We’ve not yet run out of nappies, we’ve not lost it when, after spending literally hours making, blending, pureeing and serving up, hand-made organically grown food, she has just totally ignored it and decided that she wants ‘bic bic’ – this is because Heinz make some baby biscuits that are to be honest, bloody tasty.

Our daughter has also, already, at the tender age of 14 months, got a mortal enemy (like Maggie Simpson and the monobrow baby I suppose). This child, Emily, and her clash every week at an event called ‘Treasure Baskets’. A kind women in a chunky knit jumper puts a load of blankets down and fills it with general crap, shiny things and lots of dried pasta and we parents observe what happens.

What happens is more often that not, my daughter and Emily squabble over who gets to play with the shiniest necklace that is on offer that week. Emily will find one, and my daughter will lamp her with a sponge until she drops it. She will then pick it up and Emily will do the same thing back. This repeats itself. For an hour.

Emily’s mother and I are really good friends.

In September I went back to work, part time, and it was really hard, firstly and the only reason really was because Tim wasn’t there. There is some new bloke in his office which seems wrong, and I find it hard to talk to him because, he’s not Tim. Stupid and selfish of me really, it’s not his fault.

I miss the stupid emails about irrelevant things, I miss his smile, I miss him swearing at the printer (“Fucking stupid, gadgetry contraption, no I don’t want following I just want you to sodding print you BASTARRRDDD”) and I miss his support, his reliability, his humour and his brilliance.

I was pushing a pram when I heard the news about him, and I kind of just sat in a park and cradled my daughter for ages – I experienced a numbness I haven’t felt for such a long time. There are still no words to describe it, so I’m not going to try, it was just so desperately, desperately sad.

Sorry I wasn’t planning on going there, I guess what the events of 2019 taught me is that you get 75 odd summers on this planet, if you are lucky. Don’t waste them, don’t put off telling that person that you love them, don’t put off trying that new thing you’ve been meaning to do, don’t ignore your parents, your friends, read books, listen to music, write stories, try new food, have children, look after each other.

Can I leave you with a song that I’ve playing loads recently, not for any reason I just like it?

Let Me Be Him – Hot Chip

I’ve got something in my eye, don’t know about you.