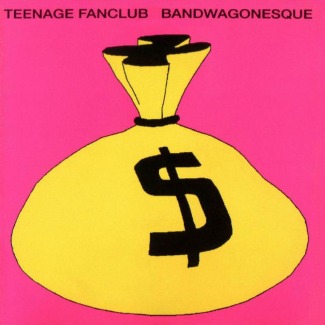 Creation boss Alan McGee‘s latest rapscallion ruse to lighten the pockets of the record-buying public is a bunch of hirsute Glaswegians with a reputation for storming live shows and a penchant for genteel melodies and feedback-strafed electric guitars.

The self-styled Teenage Fannies have mockingly sidestepped the inevitable accusations of plundering rock’s dog-eared back pages with the nod’s as good as a wink LP title, and whilst there is little doubt that TFC have quaffed long and heartily from the fulsome musical goblets of Lennon and McCartney, Neil Young, Roger McGuinn and sundry American guitar delinquents, they are close to arriving at a sound that is recognisably all their own.

Introduced by an awesome barrage of feedback and the deadpan couplet “She wears denim wherever she goes, says she’s gonna get some records by the Status Quo”, the opening song, The Concept, is a thrilling induction into TFC’s melodious grunge guitar free-for-all. Operating in a parallel universe to the blips, bleeps and chemically assisted nirvana of the still raving indie dance scene, TFC have remodelled the whiplash guitar of Jesus And Mary Chain, grafted on their own softly shimmering vocal harmonies and replaced a black-hearted cynicism with a life-affirming brio and some sorely needed humour.

Cocking a snook at those who dissect slivers of plastic in search of coded entreaties to teenage devil worship, Satan is a murderous 80-second wind-up of orchestrated chaos and guitar savagery, with enough garbled vocals to keep the moral majority on overtime until Christmas. Cold compresses are applied to fevered brows on songs like December, Guiding Star and Sidewinder, as TFC slip into an altogether mellower groove with Norman Blake‘s understated lightweight vocals wafting along on clouds of multi-tracked harmonies and eardrum-fondling melodies.

Metal Baby drags a turbo-charged take on glam rock kicking and screaming into the 1990s, Alcoholiday is a loping singalong shuffle and What You Do To Me descends upon a classically Beatlesque melody with the untrammelled gusto of a runaway train on a collision course with an ammunition dump. The obligatory instrumental Is This Music? rounds things off with a celebratory flourish – Motown drumbeats, Rolf Harris-style wibble wobble bass lines and canoodling cross-cutting lead guitars soaring off on the back of a head-spinningly timeless melodic hook.

The sound of pop eating itself it may very well be, but with an aftertaste as good as this, it would be churlish to quibble about the choice of ingredients.

JC adds :  A slightly shorter review than most in this series, it reflects the fact that Teenage Fanclub were something of an unknown quantity when Bandwagoneque hit the shops  – I distinctly remember that Tower Records in Glasgow offered a return with no qualms or questions if you bought the CD and didn’t like what you were hearing.  It’s a very positive and accurate review, although it is interesting to note that while the band had three main vocalists, Norman Blake was the only one singled out for mention; with hindsight (again!!) the failure to highlight Gerry Love is a serious oversight, especially given that he was the composer of the three songs mentioned in the lead-in to the praise given to Norman.