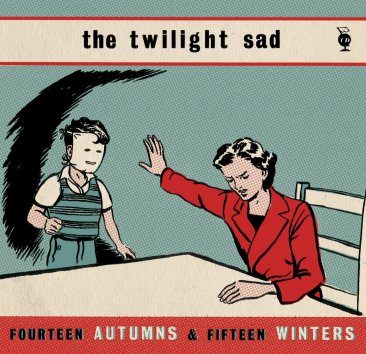 The first time you hear the Twilight Sad, a four-piece band from just outside Glasgow, they already sound familiar. It’s like they’ve been around a while, even though their debut EP only came out last September. You might think of Arab Strap‘s Aidan Moffat when hearing singer James Graham because he’s got a feel for concrete imagery and does nothing to hide his thick Scottish accent. Shoegaze comes to mind because guitarist Andy MacFarlane favors billowy curtains of white noise that dominate the sound field. And, as Pitchfork writer Marc Hogan has already pointed out, the Twilight Sad sometimes bring to mind U2, with their shared fondness for huge choruses that occasionally verge on histrionic.

All that said, the Twilight Sad are pushing these familiar elements in some unexpected and exciting directions. Graham may sound a bit like Moffett but he doesn’t sing about getting wrecked in the pub while trying to forget. His focus is primarily the concerns of adolescence, and he even narrows it down to a specific age. In the first line of the key track “That Summer, at Home I Had Become the Invisible Boy”, Graham sings “…14, and you know…” and you want to stop him right there. (Fourteen. Yes, we know how awful it can be.) But what follows is a portrait of a miserable kid that’s both touching and cathartic. Graham sounds angry, with sarcastic barbs about a “loving mother” and a “lovely home,” but “That Summer…” is anything but a tantrum. He’s got about four different levels to his voice in the song, from a calm articulation to a throat-shredding wail, but he’s never so clouded by rage that he forgets the details.

And the details are what make the track, and the album, so compelling. The song titles suggest a writer trying to find the profound in the mundane, and in that way they remind me a bit of the Clientele, even though the tone couldn’t be more different. There’s lots of weather, elements like earth and fire. There are train rides and long walks to nowhere that offer plenty of time to think. “Last Year’s Rain Didn’t Fall Quite So Hard” reads one, and the structure, a canon of Graham’s multi-tracked voice swirling around a single piano chord that sounds like the opening of the Velvet Underground‘s “I’m Waiting for My Man”, reflects the sadness streaked with hope. In “Walking for Two Hours”, Graham sings about being “so far from home” as bass drum, crash cymbal, and guitar strums merge into a tightly coiled implosion that drives the loneliness home.

The shifts in volume, though not exactly surprising, are crucial. Peter Katis and the band produced, and the sonic arc they construct tracks the lyrics beautifully. There’s a “big moment” on most songs where the music gets ridiculously loud and the guitar distortion crowds almost everything out. There is, of course, no trick in this sort of surge; a couple clicks on a floor pedal is all it takes. But the Twilight Sad know how to use dynamic range to advance the plot.

With songs so direct and the band’s hearts on their sleeves, the music’s debt to shoegaze only goes so far. Instead of tying the overdriven fuzz to a blissed-out sense of surrender to noise, the Twilight Sad uses the guitar as another kind of yell. The instrumental title track closing the record touches on My Bloody Valentine‘s “glide” guitar drone, but the almost martial drumming, with the snare seemingly vibrated by the guitar amp, keeps the track intimate and grounded. And when the band gets ethereal, it’s in a loose, folky way, as with the braid of ringing guitar sounding during the coda of “Talking With Fireworks/ Here, It Never Snowed.” Regular use of accordion, also played by MacFarlane, imparts an appropriately street-level earthiness to the sound.

As exhilarating as Fourteen Autumns is at its most anthemic, the vividness of the lyrical themes ultimately carries the record over. If one were to consider only the widescreen sound while scanning the titles, you might think the Twilight Sad were overwrought and sappy, another example of a band overly concerned with childhood, too young to know how good they really had it. But that’s not the way these songs come across at all. The Twilight Sad approach the darker side of growing up with consideration and dignity, and manage to maintain a proper perspective. “As my bones grew, they did hurt/ They hurt really bad,” an angst-filled songwriter from another generation once sang; the Twilight Sad do a tremendous job of remembering that ache.

JC adds :  It’s Saturday, and by tradition, the blog looks at something Scottish.  I know I am consistently shoving The Twilight Sad down your collective throats, but I’ll never apologise for that.  I was simply thrilled to find an American review which was so positive and understanding (apart from the U2 comparisons which i Just don’t get) that I was tempted to then go through all the successive albums and pluck out reviews from over the pond.  But I haven’t….not yet, anyway!

There will be another superb Scottish album review from yesteryears in this spot next Saturday, but there will be six others before then.