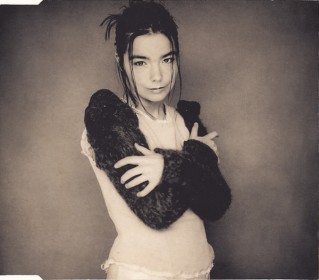 “After The Sugarcubes, I guess I had a mixture of liberation and fear. It had been obvious for a while in the band that I had different tastes than the rest. That’s fair enough – there’s no such thing as correct taste. I wrote the melody for “Human Behaviour” as a kid. A lot of the melodies on Debut I wrote as a teenager and put aside because I was in punk bands and they weren’t punk. The lyric is almost like a child’s point of view….”

Nobody anticipated the sounds that Björk would bring to the party with her first solo material after The Sugarcubes had called it a day. There was a fair chance that it would be a touch different from the music she had made over the years with her band, but surely it was still going to be indie-schmindie with the emphasis still being on a traditional line-up of a guitar, bass and drum, with a flavouring of keyboards……so it was something of a shock to the system to hear this:-

The single was released in June 1993. My first recollection of hearing it would have been at least a month later when I was browsing in a record shop I was known to frequent on a very regular basis (although to be more accurate, it should have been called a CD shop as about 90% of the stock was in that format), when my ears picked up that Björk was singing over what seemed to be an experimental trip-hop outfit. I hung around for a bit and found myself intrigued and enjoying the music, although I still wasn’t sure what was going on and whether it was a new record or was it something on which the chanteuse was guesting. A chat with the sales folk established that what was playing was an album, appropriately called Debut, which was the new material from Björk. I mentioned that I was a fan of her former band but was told that this was nothing like the old stuff, but in a good way. I was also, very kindly, offered the chance to take the CD home with me for free, on the proviso that I would return it after the weekend if I didn’t like it or pay for it the next time I dropped in. The cash was handed over a few days later………

I think I would have struggled if I had heard Human Behaviour in isolation – I certainly wouldn’t have forked out the money for what would have been an expensive single. It’s not the most commercial sounding piece of music and was from a genre of which I knew very little, albeit the stuff I had managed to pick up, such as Massive Attack, was finding favour…..but deep down, I was still an indie-boy at heart. It was only hearing it in the wider context of the album and taking the time to luxuriate in all that was coming out of the speakers that I was able to realise just how special the debut solo single had been.

Here’s the mixes that were made available on the 12″/CD singles:-

All are at least six-and-a-bit minutes in length. The Underworld mix extends to over 12 minutes. They are all worthy of your considered attention.

5 thoughts on “IT REALLY WAS A CRACKING DEBUT SINGLE (38)”