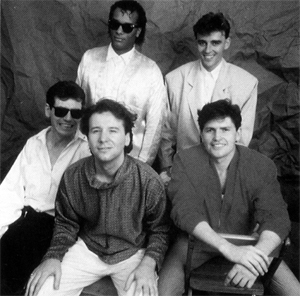 I said last week that the first nine months of 1984 were a complete whirlwind for Simple Minds.  It was nothing compared to 1985, although the roots of events dated back initially to June 1984 and then later again in November 1984.  I’ll rely on words lifted from a website associated with the band:-

Whilst writing the score for John Hughes’ latest (and in retrospect best) brat-pack film The Breakfast Club, Keith Forsey and Steve Schiff penned Don’t You (Forget About Me), intended for the film’s opening credits. Recording a rough demo, Forsey wanted it recorded by an established band and started to hawk both the tape, and himself, around the record companies of bands he admired and felt could suitably record it and add gravitas to the soundtrack.

Which is why Simple Minds found him in their dressing room after one of the Tour De Monde gigs in America, clutching a collection of Simple Minds bootlegs, and enthusing about this great song he’d written. (After hearing the song A&M invited him backstage but neglected to tell Simple Minds anything about it.) Bemused, and no doubt amused by the episode, they declined.

Bryan Ferry also declined. As did Billy Idol, who Forsey was successfully producing at the time.

Forsey was not one to give up and flew to the UK to persuade Simple Minds again to record the track. He found them in London, working on the demos for Once Upon A Time. With Forsey on their backs, and A&M on their backs, the band relented, thinking the song was just another incidental track to a forgettable brat-pack movie. They booked a studio in Wembley, and nailed the song in three hours. One of the caveats was they could play with the arrangement, and Jim added the “la la las” on the day.

The band carried on with Once Upon A Time and completely forgot about the song.

The band played three frantic sell-out gigs at Glasgow Barrowlands from 3-5 January. The set-lists provide an indication that these were very much about pleasing the local crowd:-

I Travel / Glittering Prize / Book Of Brilliant Things / Up On The Catwalk / Promised You A Miracle / Speed Your Love To Me / Celebrate / Someone Somewhere (In Summertime) / The American / Waterfront / New Gold Dream (81,82,83,84)/ Take Me To The River – Light My Fire

The next gig that Simple Minds would play was six months later at Live Aid, and as part of the Philadephia bill. Three songs made up the setlist:-

Ghostdancing / Don’t You (Forget About Me) / Promised You A Miracle

The second tune aired at Live Aid was the one that a few months earlier, in March 1985, been released in America where it went to #1. A month later, it was released in the UK, where it reached #7:-

The fact that the b-side, A Brass Band In Africa, was the same as had been included on previous UK single (Up On The Catwalk) provides a fair indication that there was never any intention to do anything with the song, a situation that only changed with the American success.

The other thing about the Live Aid gig, and as can be seen from the photo at the top of this page which was taken on the day, was that Derek Forbes was no longer part of the band, having been sacked during the sessions for the new album. His replacement was John Giblin, in whose studio they had been writing and recording, and whose previous credits including working with John Lennon, Kate Bush and Peter Gabriel.

John Giblin played bass on the new album, Once Upon A Time, that was released in October 1985. It contained four singles:-

Yup, the fact that a song, more than a year after its first appearance on an album, could sell enough copies to go Top 20 in the UK, tells a lot about just how popular Simple Minds had become.  And listening to it, just how far removed it was from I Travel, from which part of the lyric was lifted…..

I don’t actually own a copy of Once Upon A Time, but almost 1,000,000 folk in the UK have bought it, so my holding back £10 or so wasn’t that big a deal to the band. I also never bought any singles after those on Sparkle In The Rain, so all the mp3s today have been sourced from elsewhere.

The band wouldn’t release its next studio single until 1989 (albeit there was a live album and 45 released in 1987). In fact, the single was an EP entitled Ballad of The Streets which went to #1. But to me, that’s later Simple Minds and well outside of the confines of this series. Indeed, I was in two minds about staying on as far as these five singles but chose to so so after a chat with one of my fellow Simply Thrilled DJs who, being a fair bit younger than me, advised that this was the era of his introduction to the band and he adores the album.

As ever, I really have appreciated that so many have come in and offered their own views, thoughts, observations and comments these past few weeks. I really must single out Alex, Echorich, Friend of Rachel Worth, JTFL and postpunkmonk for what have been an outstanding series of contributions throughout the entire series, many of them proving to be substantial, stand-alone review pieces bordering on genius.

I’ve said it before, but it does bear repeating, that the quality of responses and critiques left at this little corner of t’internet constantly blows me away. So again, thank you!

And remember, guest postings are very welcome at all times…..so if there’s something you would like to share with a few hundred like-minded folk, then drop me a line anytime.  The address is over to the side of the blog, failing which scroll down and it will be underneath.

Tune in next Sunday to find out who is next for the Sunday spotlight.