The world and its auntie went crazy for the headlining performance by The Cure at Glastonbury a couple of weeks back. I was going to write something on the back of it, linking in to the fact that the next Simply Thrilled event is on Friday 16 August immediately on the back on an outdoor show in Glasgow by the band at which the special guests will be Mogwai and The Twilight Sad. But no matter how hard I would try, it would never top the ICA written back in March 2018 by our late and much-missed friend Tim Badger, for which there was also, uniquely, a superb scene-setter the day before.

Today, myself and Aldo are off to Dublin and tomorrow we will make our way by train to Westport where I’ll again take part in some celebrations to remember the life and times of my late brother, Davie, who died in a car crash in Ireland exactly nine years ago today. I also intend to raise a toast to Tim’s memory.

It somehow seems fiiting and appropriate to use the next two days to repost Tim’s amazing words about Robert Smith & co.

A GUEST POSTING by TIM BADGER 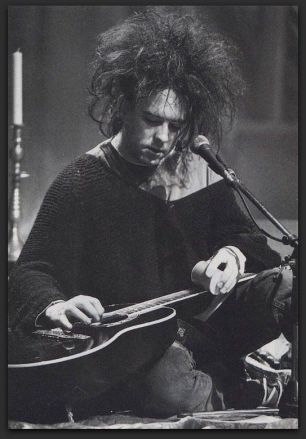 Quite a while ago, my blogging buddy SWC and I went to the cricket, and as usual we decided to do one of our ‘Mucking Around ICAs’ each, when the 11th song came on the iPod. My 11th song was The Cure (SWC’s was Blur by the way and he has so far refused to write it). So I contacted JC and said I would write him an ICA on The Cure. Then I went to Australia so it got parked.

Last week I decided to write it. However I started this story as an introduction and realised that it was quite a long story in its own right, so I decided to send this in on its own and the ICA could follow.

One night I went to a pub in Leeds called Churchills, it was a big pub frequented by the alternative crowd, largely because around ten pm the upstairs part of the bar would be transformed into a nightclub and an indie disco would take place and occasionally a band would turn up and play. I would wear Bob over the top of a band TShirt alongside a pair of black drainpipes and a pair of Doc Martens and try and look cool in the corner. I would then wait for the DJ to play The Cure or the Pixies or New Order or if I was feeling daring Ministry and then I would launch myself on to the dancefloor, Bob’s sleeves causally pulled down over my hands in order to give myself a bit more mystique.

I used to have a great time at Churchills, it was one of the few places left in the city that served snakebite and black, a legendary if not slightly lethal drink adored by the alternative and big haired crowd. Basically cider, lager and blackcurrant – which gave it a purpleish hue, Goths loved it obviously. Now that night in question I drunk a little bit too much snakebite and black (let’s be honest two pints was enough for anyone – if the ridiculously strong cider didn’t get you the sickly sweet Ribena substitute would). I knew I was drunk because I danced to a New Model Army track and no one danced to New Model Army and still expected to be considered cool at the end of the night. About two am I left Churchills, I’d like to say I left on the arm of a beautiful girl called Angela (who as it happens was a dead ringer for the singer from The Cranes but this being 1990 she didn’t know that yet), but I know I left alone but manage to share a cab home with a bloke called Gavin – I know this because he vomited on the pavement outside my house and the stain was there for about a month afterwards.

I woke up in the morning and felt like death. My head pounded, I was all shaky and clammy, about midday I started to feel a bit more human and I realised that I was cold, so I turned to my go to warmth (I was a student, heating was too expensive) – Bob – I mean it would have stunk of cigarettes (back in the days when you could smoke in a pub) but it kept me warm. So I went to the chair in my bedroom where clothes would have been slung last night.

I had a vague recollection of taking Bob off when dancing to The Stone Roses. I’d popped it in the corner where I was sitting, just by where the lovely Angela normally sat with her mate Gemma. Oh God, Bob.

Now, I know what you are thinking, “Man up Badger it’s only a jumper”, and you are right, but that jumper was unique, sort of. Well ok, it wasn’t, it cost me a £2 from a charity shop, but I loved it, apart from my copy of ‘Substance’ on double vinyl, it was probably my favourite thing in the entire world – it was certainly the warmest thing I owned.

I sort of hoped the lovely Angela had taken it home with her and next week (After she’d finished cuddling it for a week) she would come up to me and smile her sweet smile and hand me the jumper and take me by the hand and we would walk into the moonlight, bangles jangling – but in reality I knew that I had left it on the long seat thing in the corner.

So ladies and gentlemen, I got the bus back to town. I sat there sulkily (still hungover) with my Walkmen attached to my ears. I think for some inexplicable reason I had ‘Babble’ by annoying Derry punk popsters That Petrol Emotion on the stereo, this didn’t improve my mood.

I got to Churchills around 2pm. It was open, thankfully, but the upstairs bit wasn’t. So I meekly asked the nice lady behind the bar if she could check if my jumper was up there, in the corner by the long seat, she reluctantly agreed. So I sat there at the bar for what seemed like a decade, cradling a lemonade, the sugar helped quite a lot to be honest, and then she returned.

She was holding Bob and I could have hugged her.

She handed Bob to me and then she said “Me Grandads got one just like that” and crushed what was left of my cool. I mumbled a ‘Thanks’ and walked out of the pub. I got roughly twenty foot around the corner before I stopped and popped Bob over my head.

Five minutes later, as I approached the bus stop, I saw a familiar face, the lovely Angela, sat forlornly at the bus stop, looking bored.

“Hi” I said. Slyly pulling the sleeves of Bob over my hands.