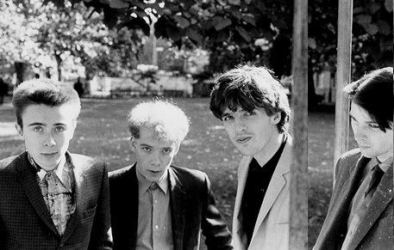 Josef K were a Scottish post-punk band, active between 1979 and 1982, who released singles on the Postcard Records label. The band was named after the protagonist of Franz Kafka’s novel The Trial. Although they released just one album while together and achieved only moderate success, they have since proved influential on many bands that followed.

The band was formed in 1979 originally as TV Art by Paul Haig (vocals, guitar) and Ronnie Torrance (drums), later joined by Malcolm Ross (guitar, keyboards), with Gary McCormack added on bass guitar, who soon left (later joining The Exploited) with David Weddell replacing him. After recording a ten-track demo, their first release was the “Romance”/”Chance Meeting” single on Orange Juice drummer Steven Daly’s Absolute label in December that year. They were then signed to Postcard Records, the label founded by Daly and Alan Horne, releasing a string of critically acclaimed singles in 1980 and 1981. The band recorded their debut album, Sorry for Laughing, in 1981 at Castle Sound Studios in Pencaitland, but it was shelved, with the band unhappy with the clean, polished production, Haig describing it as sounding “flat and disinfected”, with only a few copies being released. They returned to the studio in Belgium to record The Only Fun in Town, opting for a more ‘live’ sound and recording the whole album in two days, Haig later expressing a measure of regret that “we decided to make an almost unlistenable record with the vocals mixed down really low”. It was their only album release while together, and while it placed well on the UK Independent Chart, it received a poor critical reception.Their earlier unreleased Sorry For Laughing album was eventually issued on a 1990 CD reissue of The Only Fun in Town.

The band split prior to the release of the 1982 single, “The Farewell Single” through Les Disques du Crépuscule, which included the Peel session track, “The Missionary”, Haig deciding to call an end to the band while they were at a creative peak.Torrance joined Boots for Dancing and later (with Weddell) formed The Happy Family with Nick Currie (aka Momus).Haig embarked on a long solo career, releasing a string of albums on his own Rhythm of Life label between 1984 and 2008, while Malcolm Ross joined Orange Juice and then played with Aztec Camera and Blancmange before embarking on a solo career.