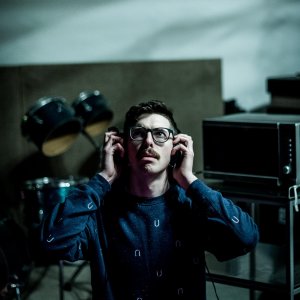 This is how his PR agency sells him:-

Jonnie Common is a Scottish songwriter, producer and performer known for making catchy, digestible pop songs from strange sounds and subjects. With his own special blend of electronic apparatus, acoustic instruments and field recordings, this is an artist who doesn’t quite fit into any box perfectly and that’s just how he likes it.

As you can see from his website, he’s been part of the music scene around these parts for about a decade.  He first came to my notice via favourable noises being made by Matthew, from Song by Toad Records and given he’s a man with fairly impeccable taste, I was soon paying attention.

Jonnie Common is another performer, akin to Adam Stafford, who makes great music on record but is best enjoyed in the live setting.  Given we are in mid-June, it makes sense to have this song, from the 12″ split single that was released on Song, By Toad back in 2014:-