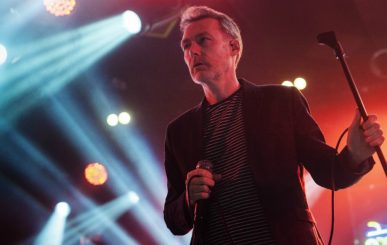 There was an eight year period from 1999 to 2007 covering the break-up and then reformation of The Jesus and Mary Chain.

Lead singer Jim Reid kept himself busy in a number of ways. For a number of years he was active the band Freeheat (which included fellow JAMC’er Ben Lurie as a member) and then as part of the backing group for Sister Vanilla, the stage name adopted by his younger sibling Linda Reid, whose debut album, Little Pop Rock, was released initially in 2005 in Japan by the P-Vine record label and then made available closer to home in 2007 thanks to the very fine folk at Chemikal Underground.

It was also in 2005 that Jim Reid released his first solo single, Song for a Secret, on the Transistor record label, an effort he followed up the following year on the same label with Dead End Kids.

Some points of interest. The debut solo single featured a Sister Vanilla track on its b-side. The follow-up single featured a cover of a Bob Dylan song as its b-side, albeit one that was better known from versions recorded by Manfred Mann and Fairport Convention, albeit the latter’s version was translated into French as Si Tu Dois Partir (which itself was later covered by Lloyd Cole)

May as well go the whole hog:-

Oh and here’s a bonus track:-