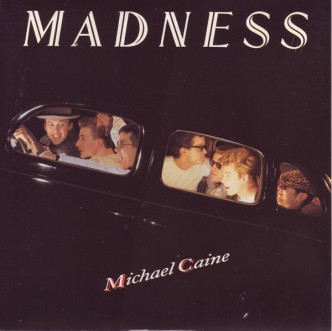 Michael Caine is a song by British band Madness, released on 30 January 1984 as the first single from their album Keep Moving. The song was written by Carl (Cathal) Smyth and Daniel Woodgate, and features Smyth on lead vocals in place of usual Madness vocalist Suggs. Michael Caine spent eight weeks on the British chart, peaking at number 11.

It is named after English actor Michael Caine and includes his vocal samples, recorded specifically for this song. The song’s hook, a repetition of Caine introducing himself by name, recalls his role in the 1960s spy film The Ipcress File, in which his character, Harry Palmer, repeats his name while trying to stay sane under torture.

It was only after it became a hit, having enjoyed extensive radio exposure and all the rest of it, did the true meaning of the song come out, as explained years later in a biography of the band:-

First impressions suggested this laconic song was an offbeat tribute to a very British institution from lines like ‘All I wanted was a word or photograph to keep at home,’ to the opening soundbite ‘My name is Michael Caine’ – captured by sending a sound engineer down to a private members club frequented by the actor….

….Cathal revealed an altogether more serious subtext behind the lyrics. “(It) is about the informers in Ireland and the way the government were using them to put people in interment camps, in prison – but I didn’t want to make that (too) obvious. I wanted the atmosphere of distrust and I threw Michael Caine in as a red herring to confuse people. His name seemed right. I had a general admiration for Michael Caine and ‘Get Carter’ and ‘The Ipcress File’ had the sort of atmosphere I wanted to create – we even used some of his phrases. Looking back to ‘Give Ireland Back to The Irish’ by Paul McCartney, that never got played. You’ve got to be careful what you say.”

I hadn’t actually realised this to be the case until a few years ago when I came across a reference to the song in book about 2-Tone in which it was pointed out just how political all the band who were on, or were associated with that label/movement, truly were.

7 thoughts on “THE MOST SUBVERSIVE OF POP HITS”