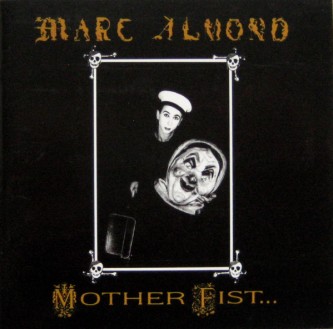 The third solo album was released in April 1987.

Again, it is attributed to Marc Almond and The Willing Sinners.  It’s full title is Mother Fist and Her Five Daughters although it is often shortened to Mother Fist.  The title was taken from a shorty story written by Truman Capote.  Of its 12 tracks, eight were fully written by Marc and the remaining four were credited jointly to him and Annie Hogan.

No cover versions on the album and there were three 45s lifted from it, all in advance of the album’s release:-

The last of these was a 12″ only single.  The Hustler was also to be found on the parent album while Two Sailors… finds Marc and Annie setting an English translation of a poem by Frederico García Lorca to music.

It’s an album that confounded a few folk – it was his poorest selling solo album to date with perhaps it being just too ‘in your face’ in its sordidness – it certainly wasn’t tailor made for daytime listening.  Meanwhile, the promo videos, with all sorts of camp and gay imagery very much to the fore, were unlikely to appeal to the producers.

There’s a very glowing review from Ned Raggett at allmusic, who declares it ‘an all round triumph’, on the back of the following words:-

Following up both Stories and his fine covers EP A Woman’s Story, Almond took a turn for the more challenging on Mother Fist, to be rewarded with the loss of his contract and a search for a new label. Quite why that should have happened is all the more surprising when upon listening, it becomes clear that Mother Fist was and still is the best Almond album of original material to date.

With Hedges once again producing and the Willing Sinners still producing instrumental magic — the great work of Hogan on keyboards, McCarrick on cello and accordion, and McGee on bass and orchestrations simply can’t be overstated here — Almond created a generally sparer and more theatrical album that embraces classic European cabaret to wonderful effect, more so than any American or English “rock” album since Bowie’s Aladdin Sane or Lou Reed’s Berlin.

The b-sides were very much in the style of the album…and in Gyp The Blood, you get a seven minute plus epic which would have made for a great entry in the songs as short series series.

As the review indicates, it led to Virgin Records dropping the singer but as will be shown next week, he knew exactly how to bounce right back and put himself back into the mainstream.