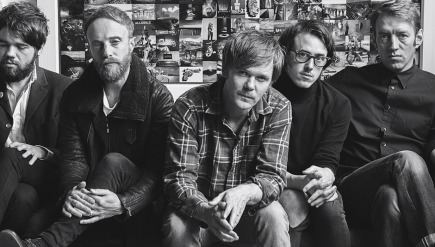 The Scottish alt rock group Idlewild formed in Edinburgh in late 1995, originally comprising singer Roddy Woomble, guitarist Rod Jones, bassist Phil Scanlon, and drummer Colin Newton. A year of steady touring preceded the release of the band’s 1997 debut single, “Queen of the Troubled Teens,” which immediately found favor with Radio 1 DJ Steve Lamacq. The resulting media exposure brought Idlewild to the attention of Fierce Panda, and the London-based label agreed to issue their sophomore single, “Chandelier,” which doubled as their first recording with new bassist Bob Fairfoull. A mini-album, Captain, followed in early 1998, and as word spread of their chaotic live shows (described by one U.K. magazine as “a flight of stairs falling down a flight of stairs”), the group signed with Food Records and released Hope Is Important in late October. 100 Broken Windows followed in early 2001, with a subsequent U.S. tour launching later that spring.

The next year, Idlewild issued The Remote Part. “American English” and “You Held the World in Your Arms” were massive hits in Europe, making the album Idlewild’s most successful project to date. Not everyone in the band was happy, though, and bassist Fairfoull was kicked out of the lineup after an Amsterdam show in September. Guitar technician Alex Grant stepped in to fill his shoes for the remaining European dates. Gavin Fox (bass) and Allen Stewart (guitar) were added permanently to the lineup early the following year, just prior to the American release of The Remote Part in March.

Warnings/Promises followed in 2005, featuring songs that had been written during an inspired four-month session in the Scottish Highlands. Fox left the band the following spring and was replaced by former Astrid bassist Gareth Russell, who made his debut on the 2007 album Make Another World. Meanwhile, Woomble made his solo debut with My Secret Is My Silence, an intimate acoustic album featuring background vocals by Kate Rusby, and joined folk musicians Kris Drever and John McCusker to record the collaborative Before the Ruin in 2008. One year later, Idlewild bucked convention by releasing their sixth album, Post Electric Blues, as a free, fan site-only download; a traditional release followed in October. In 2010 the band went on a hiatus which was to last three years. During that time, Jones launched a solo career and formed the side project the Birthday Suit, while Woomble released two further solo albums. Idlewild reconvened in 2013 on the Isle of Mull to start sporadic work on their seventh studio album, with new bassist Lucci Rossi replacing Russell. The album was finally finished and set for release in February 2015. Entitled Everything Ever Written, it was produced by Jones and self-released through PledgeMusic. The grungy lead single “Collect Yourself” saw the band exploring a new direction, with a distinct funk influence.

I’ve enjoyed much of what the band have released over the years and they never disappoint in the live setting.  Here’s a single from the 100 Broken Windows era:-