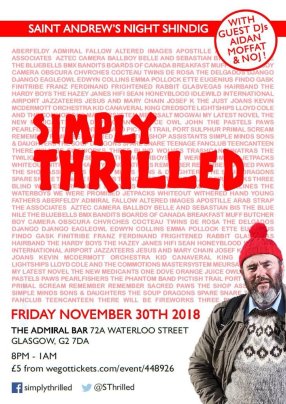 Simply Thrilled is on its way back, once again at The Admiral Bar in Glasgow, on the evening of Friday 30 November, And you’ll see from the publicity poster, there’s a couple of guest DJs, one being a well-kent face and the other one of his best mates.

This blogging malarkey over the past 12 years has enabled a ridiculous number of incredible experiences, far too many to list and to risk mentioning as inevitably I’ll have missed something or someone out. Being able to share a stage (as such) with the nearest thing Scotland has to a living national bard is up there.

You’ll hopefully recall how much fun we all had at the debut Simply Thrilled event. It was never the plan to wait so long to get it all going again, but a few logistical and availability issues caused a bit of a delay. It’s somehow fitting that a club night dedicated to music, new and old, from singers and bands from Scotland will coincide with the feast day of our national saint, thus providing an opportunity for the tagline of a St Andrew’s Night Shindig.

Robert, Hugh and Carlo will, as ever, put together a genius plan to make the evening go with a swing, with some free stuff to hand out to the first 100 or so revellers who come through the door (nothing too fancy, it’ll be a one-off badge or the likes), while Ash is already putting his mind to some suitable and appropriate artwork, visuals and graphics for display on the walls of the basement venue. Me? As I said in the aftermath of the launch night, I’ll pull together a set list for my allocated time in charge of the laptop and hope there’s a similarly warm response as I try to take patrons of a certain age back to the days of 80s student unions and the like.

The really positive reactions to certain songs took us all by surprise last time out. A number of tunes, some which were huge hits and others which were loved locally but didn’t travel well outside of West-Central Scotland, got loud cheers from the outset. Others had folk, mostly blokes, cosying up to the booth and asking to be reminded what a particular song was and saying it was amazing to hear something again for the first time in decades. I’ll very happily take the same result again.

This one filled the floor:-

The temptation is to try to play a completely different set next time around, but in the same way that bands can’t get away without playing the songs that the fans have come along to hear, those of us charged with trying to ensure the floor fills up and stays that way must air the popular tunes and requested tunes. I suspect the big hit for Danny Wilson will be aired at some point in the evening, but there should still be room for some more recent stuff such as this:-

mp3 : The Twilight Sad – I Could Give You All That You Don’t Want
mp3 : Mogwai – Party In The Dark

To my surprise, neither of these two outstanding pieces of music have been posted before.

Tickets for the St Andrew’s Night Shindig, priced just £5, are available from here.

PS : As it all this wasn’t simply thrilling enough, my dear old friend Walter from A Few Good Times In My Life is flying in from Germany to come along.  Can’t wait.