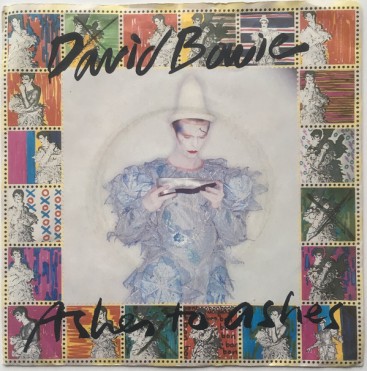 8 August 1980. The date for the release of the song which would give David Bowie his second ever #1 hit in the UK, a full five years after Space Oddity.

The 17-year old me loved this. I hadn’t been all that much of a Bowie fan up until this point, admiring him more than adoring him, but this came out just as the point when it all began to make sense. My interest in electronica was beginning to grow at a rapid rate as my tastes expanded dramatically beyond the cut’n’thrust of new wave/post punk guitars.

I began to borrow Bowie albums from the 70s from friends who had either latched on to him earlier or who elder siblings who had been apostles from the earliest days. I didn’t embrace everything fully and indeed didn’t at the time feel any of his previous albums were as good as Scary Monsters (And Super Creeps) which had been the first purchase of my own, followed by a budget price compilation album which was released just before Christmas 1980. I’ve changed my mind since then…..

I didn’t care much for the b-side to the single. It mentioned that it was from the album Lodger, a record I had listened to thanks to a friend buying it and playing it, but other than Boys Keep Swinging hadn’t done anything for me.

I haven’t changed my mind on it track or its parent album over the years.

The US release of Ashes to Ashes had an absolute belter of a b-side:-

The opening track of the Scary Monsters album remains one of my favourite Bowie numbers of them all, probably for as much as it being such an astonishing and different introduction to his wider work beyond the singles.

One bizarre thing I learned in doing a bit of research for this post. David Bowie would only enjoy one more solo #1 single in the UK with Let’s Dance in 1983. His total of three has been matched by a further three on which he was a co-vocalist or contributor (Under Pressure, Dancing In The Streets and Perfect Day, recorded with a myriad of others for a charity single in 1997). That’s some good pub quiz knowledge there for you…..