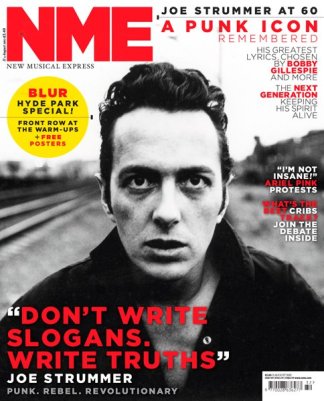 The times, they really are a-changin’

The NME is to cease publication in print after 66 years, the weekly music title joining a growing list of once mighty magazine brands that now only exist online.

The NME will continue to keep a sporadic presence in print with special issues such as its paid-for series NME Gold, to cater for music stars’ appetite for appearing in a printed product.

In 2015, the magazine stopped being a paid title after a decade of sales declines saw its circulation drop to just 15,000. It relaunched as an ad-funded, free title with a circulation of 300,000 in a last throw of the strategic dice for the print edition.

“Our move to free print has helped propel the brand to its biggest ever audience on NME.com,” said Paul Cheal, the UK group managing director, music, at NME publisher Time Inc. “We have also faced increasing production costs and a very tough print advertising market. It is in the digital space where effort and investment will focus to secure a strong future for this famous brand.”

Time Inc UK is consulting with the NME’s 23 editorial and commercial staff about possible redundancies.

NME, which has been printed weekly since 1952, managed to make money as a brand overall through spin-off activities such as awards and events.

“NME will also be exploring other opportunities to bring its best-in-class music journalism to market in print,” Time Inc UK said.

The closure of the weekly comes a week after Time Inc UK, which also publishes titles including Marie Claire and Country Life, was sold to private equity group Epiris in a £130m deal.

Epiris had been expected to sell or restructure a number of titles – the company said it wanted to bring “clarity and simplicity” to the magazine portfolio – with the print edition of NME known to have been loss-making for a number of years.

“Our global digital audience has almost doubled over the past two years,” said Keith Walker, the digital director of NME. “By making the digital platforms our core focus we can accelerate the amazing growth we’ve seen and reach more people than ever before on the devices they’re most naturally using.”

In October, Condé Nast, the publisher of Glamour magazine, shocked the market announcing that the UK’s 10th biggest magazine would stop printing monthly. Instead, it is focussing on a digital-first strategy with a print edition just twice a year.

It’s been a very long while since I was really interested in what the NME was saying, but there’s no denying it had a huge influence on the development and expansion of my listening habits in my formative and later years..