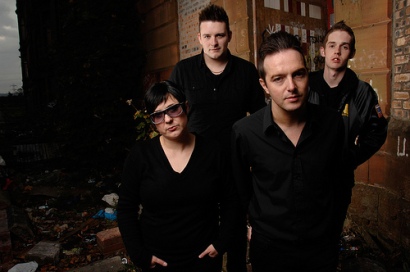 Based in Glasgow, Scotland, indie rock quartet Glasvegas comprise cousins James Allan (singer and principal songwriter) and Rab Allan (guitar), bassist Paul Donoghue, and drummer Jonna Löfgren. Although they deftly fused a love of doo wop and classic, Spector-produced pop with a nod to some of the more intense and inventive guitar acts of the ’80s, perhaps the band’s defining attribute was in James Allan’s earnest lyricism.

Former Creation boss Alan McGee and ex-Libertines guitarist Carl Barât were so struck by a 2006 hometown performance by the band that each went on to ensure that more people witnessed their powerful live sets. Their third single, “Daddy’s Gone,” was ranked as the second best track of 2007 by NME and even led to the band striking up a friendship with Lisa Marie Presley after the song came to her attention. Next, their platinum-selling debut album, Glasvegas, received widespread praise following its release on Columbia in September 2008, and went on to be nominated for the prestigious Mercury Music Prize in 2009. Less than three months after the release of their debut, the Transylvania-recorded, Christmas-themed EP A Snowflake Fell (And It Felt Like a Kiss) was issued, bringing further acclaim.

The band’s sophomore full-length, Euphoric /// Heartbreak \\\, was written, demoed, and tracked at a beach house in Santa Monica, California during 2010 before undergoing final production under the direction of Flood in London. Before any recording had taken place, it was announced that original drummer Caroline McKay had left the band. Her replacement, Swedish music student Jonna Löfgren, joined Glasvegas after sessions for the album had been completed. On its release in April 2011, Euphoric /// Heartbreak \\\ reached the Top Ten of the U.K. album chart and also hit the number one spot in Sweden. To promote the album, the band embarked on a second world tour, which incorporated their biggest European headline gigs to date as well as successful trips to both Australia and Japan. Then, in late 2013, Glasvegas returned with a self-produced third studio album, Later…When the TV Turns to Static, released through BMG. The next couple of years brought further live dates throughout Europe and North America, and Later… also enjoyed a summer 2014 release in Central and South America. To assist with promotion of the album in these territories, the Secret Truth EP was issued, before Allan relocated to Stockholm to work on new material.

They’ve been fairly quiet for a while now and the feeling is they never quite managed to scale the heights of the earliest material.