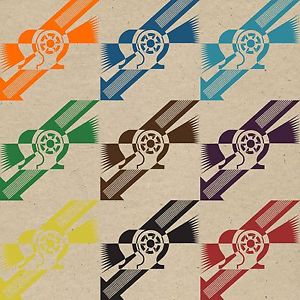 Today’s first half is lifted from a posting back in May 2016:-

New Order had released a belter of a debut single in Ceremony. The follow-up hit the shops in September 1981:-

It was quite similar to a number of the tracks on the debut LP Movement and it wasn’t a huge shift away from the Joy Division sound albeit it did highlight that with Bernard Sumner was a completely different sort of vocalist from Ian Curtis.

I bought the only copy of this single that my local record shop had and it came in a cardboard sleeve with a strange green design which I thought alluded to the title of the b-side. I soon discovered that it had been released in nine different coloured sleeves (as illustrated above) and while I wanted to own every single one of them, there was no way an 18-year-old student, who that month had just started university, was going to waste valuable vodka money on something as unworthy as a 7″ bit of plastic.

The b-side was a precursor to what New Order would become within a few months – a band of their own right delivering electronic dance-music.

This is ripped right from vinyl folks and is a bit shorter than the versions generally available on compilation LPs, so please forgive the fact that there’s also a wee skip and a jump about 3mins in…..

In December 1981, Factory Benelux would release a 12″ version of Everything’s Gone Green, backed by two completely new tracks.  This merely added to the mystique of the original release with some considering it was a double-A single.  The import was ridiculously expensive compared to other 12″ singles of the day, but I still went for it. It was later re=released in 1985 and again in 1986, but I have the original with the solid gray/white label, blue type, and cat number of FBNL 8.

I’ve included all these images as the labeling caused confusion for years. The track names of the B-sides are correctly identified on the label, but, if you look at the sleeve, they are the wrong way round. This would lead to their being misidentified on subsequent releases; for example, the track identified as “Mesh” on the CD version of the Substance CD compilation is in fact “Cries and Whispers”.

Two hugely enjoyable and much underrated b-sides no matter what name they were given! And better than some of the cuts that were included on Movement.