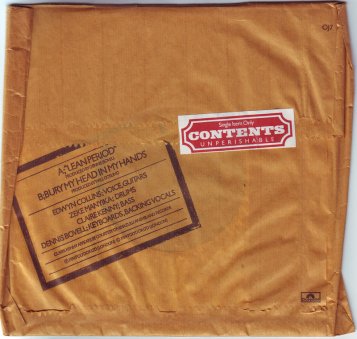 Orange Juice signed off with a flourish with their final single having the very tongue-in-cheek title of Lean Period. It was issued in 7″ and 12″ formats in a brown paper bag (the reverse side of the 7″ version is pictured above), a 12″ format with a printed sleeve and a limited 7″ edition that came with an additional flexi disc with two live tracks.

Despite all this, it staggered around the nether region of the charts but as this was a time when the charts were measured on a Top 100 it meant, in official terms, that Lean Period actually spent three weeks in the official rundown – entering at #78, rising to #77 and then leaping, salmon-like to the giddy-heights of #74 in October 1984.

The flexi disc recordings are very lo-fi, ripped as they are straight from those fragile and flimsy bits of plastic and so you’ll have to turn the volume right up. There are superior versions available via the Coals to Newcastle boxset but I thought I’d stay true to the blog’s principles.

3 thoughts on “THE FAREWELL SINGLE IN ALL ITS GUISES”